We got an ice/snow storm on 12/6/13.  Unlike normal places where snow comes every year, this place acts like it’s some kind of newfangled thing that has never happened before in the existence of earth, and the entire area just shuts down like it is some kind of snowpocalypse.  Not us, not Fiz, no… we would not be defeated by icemageddon; We braved the strange white surroundings the following day.  We conquered and we survived.

Not only did we force him to be a subject of photography among the strange white stuff, we also saddled him up and rode. (Thanks to that awesome indoor arena, where it is dry and not windy, we were able to do that!) I think he actually enjoyed both the snow, and working indoors.  We spent some quality time with him cooling him off in the indoor as well.  He enjoys following us around and harassing us for peppermints and/or treats.  He licks like dog.  Begs like one too.  It’s quite pitiful, actually. 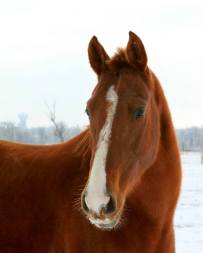