Fiz has been at a professional trainer since March 25th. He’s there almost through the end of April. There have been some big changes in his life during this time period. He is used to living in a pasture, and only coming in to work, then going back out. He lives in a stall the majority of the time at the trainers place. He is used to being worked only about 4 days a week. He is getting worked 6 days a week at the trainer. He’s used to amateurs who fly by the seat of their pants and lack professional training knowledge. Now he’s being worked by a professional who has a clearly defined training method and structure.

First, let me say this. He is much improved in several areas. Below, I’ll take you through the gaits and what advice has been offered for each.

#1, The Walk
Flat, straight, and patient. Make him walk straight up into the corners and make the arena square. Make his shoulders and his hips walk inline with each other, and make sure as you are walking to push him up to the bridle so he has to take ahold of it. Do not pull. Hands steady, and in the same spot. When he takes hold, give. Just a small release of your fingers, but keep pushing with your leg making him walk up to the bit.

#2, The Trot
A country pleasure horse needs 2 trots. The pleasure trot and extended trot. We knew this, but previously Fiz would get mad when he was asked to go faster and he would break into a canter without ever actually going faster. It’s better to have only one speed than have to break, so that’s what we used to do.  A pleasure trot needs to have energy, it needs to cover ground, but it also needs to save room for max trotting speed at the extended trot. Same principles apply as the walk, use a lot of leg, push him to the bridle and make him take hold as he moves forward. Music to my non-equitation body type and mind frame was, let your legs hit him in the sides and even flop around on him some. Apply pressure, keep him moving forward and pushing from the hind end. He is expected to move from the back to the front, pushing off his hind to give his front momentum. Always keep the whip right against his shoulder.

When you ask for the extended trot, cluck, then squeeze (don’t kick) and if he doesn’t move on, give a slight tap with the whip on his shoulder. Not a whack, a TAP. If that doesn’t do it, growl at him and tap again. He has learned that he has to move on and not break into the canter. That doesn’t mean he will never break. If he does, don’t stop! Keep cantering. Teach him that it’s more work to do the wrong thing than the right. Rest assured, he will find his trot after enough of making him go and go, and you will find the sweet spot where you have hit max trotting speed before he has to canter. If you really want to find good separation, work him at a pleasure trot, then extended trot, and bring him back down to a pleasure trot. Even if just for one rail, you try to find that max speed, really ask him to step up, then come back down to the pleasure trot. Keep the energy and the go forward all the time. Do not forget about contact with his mouth (keep this in mind at all gaits) and do not forget that reward of giving when he takes a hold on his bridle and moves on forward. Always give him that reward.

#3, The Canter.
His canter cues are more clearly defined and he is learning the expectation for getting and keeping the correct lead both directions of the ring. Previously, we thought each time he took it wrong, we should stop and ask again until he got it right. This method had taught him if he does it wrong, he gets to quit. The new method is, no matter which way he takes it, do not let him stop. Make him GO. And go, and go some more. Teach him that just because he does something wrong, he does not get to stop and quit. He’s working no matter what he does, and again, it’s going to be harder when he does it wrong.

The canter cue needs to be very clear. A slight turn of the head (bring the rail rein straight back and at the same time give with the inside rein with a release of your fingers), rail leg, and SPEAK the word “Canter” to him. Speak the word EVERY TIME you ask for the canter. Do not be afraid to be vocal. IF he runs sideways when you turn to canter, DO NOT let him canter. This is unacceptable behavior that will be punished by forcing him back to the rail and to walk straight, and patiently, until he is asked again for the canter with the clear signal. This could mean setting him up to canter multiple times, but never allowing him to actually take off. Set up to canter and then go back to straight walking forward on the rail until he doesn’t get all sideways and crooked. Then maybe trot. Do anything else so he loses the train of thought to anticipate cantering.

When cantering, he is capable of cantering SLOW.  Take back on the upward motion, and give on the downward motion.  Give and take, constantly.  And still, SAY the word CANTER, or make a “kiss” sound to him.  Make him canter straight, and do not let him swing his back end to the middle, because this makes it easier for him to swap leads.  If anything, turn his head more toward the middle so it makes it more difficult for him to swap leads or fall out of the canter.  When he does it right, don’t push the issue or make him keep on going. Maybe one or two trips around is good, then quit on a good note.  Remember, make it EASIER to do the RIGHT thing. 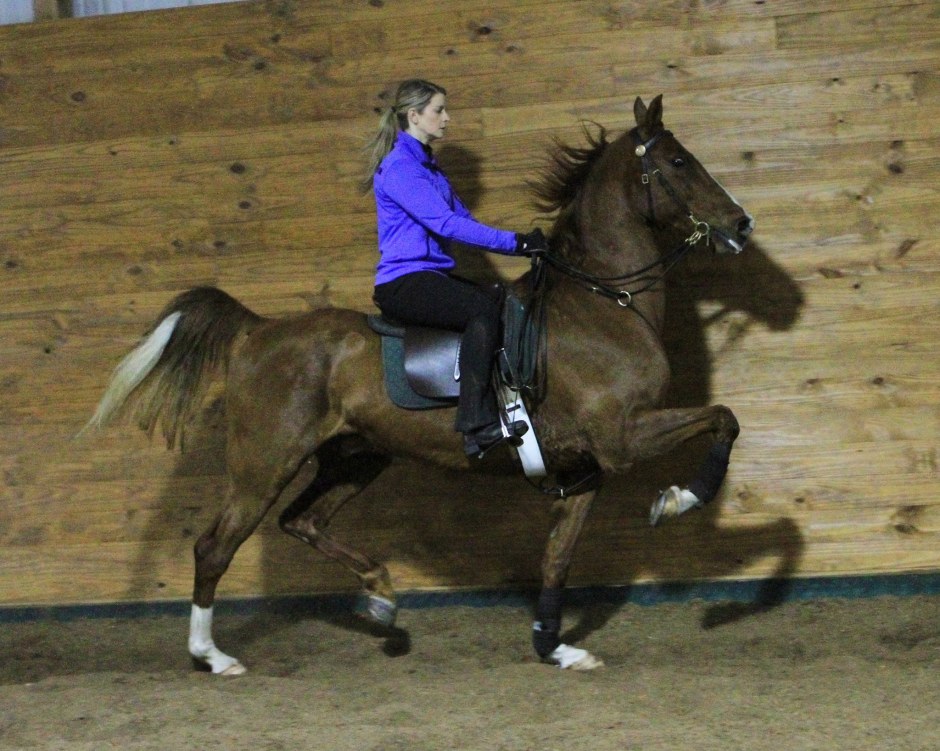 Bottom line is, he’s going to make mistakes. The most important thing is to teach him that it’s easier on him to do right than to do wrong. Bad behavior is punished by harder work. Good behavior is rewarded by giving (releasing your fingers) in the bridle and getting to be finished sooner because he did everything you asked and he did it correctly.

Always ask yourself the question: “Am I training or am I un-training?” and if you are not certain, it’s probably the latter. If you can answer that you are training, follow up with “What is this teaching him?” and as long as you are happy with what it is teaching, stick with it. If you’re not, change it up. Think ahead, have a plan, and execute that plan.
Another thing we’ve been taught is that he needs to jog. And jog, and jog, and jog. The more fit he is (which is accomplished by miles and miles in the jog cart) the easier it is going to be for him to do the right things, the easier it will be for him to be able to willingly go forward and move on. We can’t ask him to run a marathon when he’s been working as a sprinter.

Check out this video clip after his first week of training.

A Short Video from Professional Training